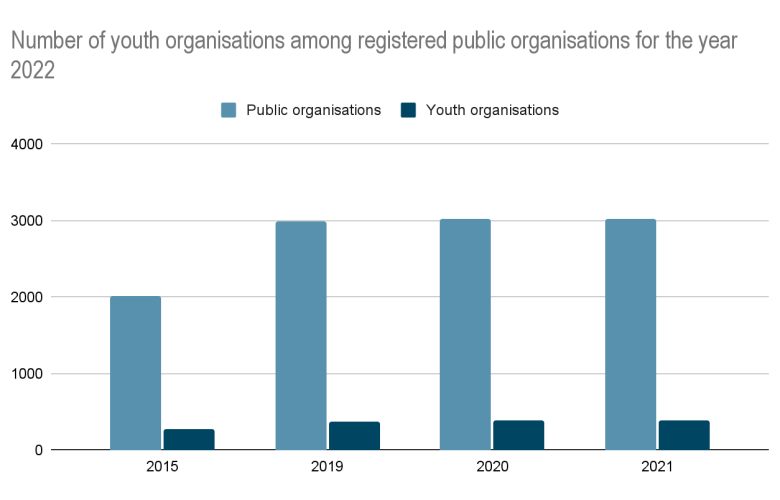 According to data collected by August 2020 during the preparation of the Strategy for the Development of State Youth Policy in Belarus, there were 1,921,07 thousand young people aged 14-30 years old, with a high literacy rate (99.8%), but there was a downward trend in the youth population: from 2005 to 2018 this share fell from 27.0% to 20.2% and, consequently, the potential number of participants in youth organizations was also decreasing.

In 2016 the Office of European Expertise and Communication in its sectoral analysis concluded that there is no common database of public organizations (public associations and establishments) registered in the Republic of Belarus, which is in the public domain [2]. However, it also refers to data from the Ministry of Justice, which provides summarized official statistics in quantitative terms, which enabled the Office to draw some comparative conclusions. According to that data, there were 2,607 public associations registered in the Republic of Belarus for 2015, of which 272 youth public associations (including 27 children’s associations.) Out of 295 organizations, which were identified by the research team as youth organizations (no reference to the official source in the sectoral analysis is provided by the team of the Office of European Expertise and Communication).

According to the official data of the Ministry of Justice of the Republic of Belarus, as of 1 January 2021, public associations of various types are registered in the country [3]:

It is interesting to note that, as of 2022, there are 51 higher education institutions in Belarus, with a total of 1,462,900 young people, according to official data.

In our opinion, a rather significant number of active youth, including a relevant factor, was taken into account by the authorities in the mass de-registration of youth organizations and institutions in 2021-2022, as well as in the writing of the already published strategy for youth policy until 2030 in the Republic of Belarus.

One of the groups that suffered the most from state repression after the events of August 2020 were young people, in particular those receiving higher education in the Republic of Belarus (students), as well as university professors. Due to the pressure on students, who are actively demonstrating their civic position, the Belarusian National Youth Council «RADA» prepared materials on the situation of human rights, youth (including the right to education) in Belarus for the report of the Special Rapporteur on the situation of human rights in Belarus to the UN Human Rights Council. These materials were also sent to the UN Special Rapporteur on Human Rights in Belarus, Anaïs Marin.

On 12 November 2020, searches were conducted in the office of the ZBS and at the homes of its activists. On the same day, 10 activists of the student movement, as well as one lecturer of the Belarusian State University of Informatics and Radioelectronics were detained. On 18 November 2020 and thereafter, human rights organizations of the Republic of Belarus declared all detained ZBS activists as political prisoners.

As the Belarusian National Youth Council RADA, an umbrella organization of 32 youth organizations, established to consolidate youth organizations and initiatives in Belarus, points out in its alternative report on youth rights to the UN Committee on Economic, Social and Cultural Rights in 2022, 31 member organizations (of 32) have since been deprived of registration in Belarus, some in 2021, including on unlawful bases. [4]

It is also important to consider the fact that, according to the student organization Association of Belarusian Students (hereinafter — ZBS), at the end of 2021 there were 15 student strike committees, in 4 cities of Belarus, with a total number of 98.5 thousand people. At the moment, the Association represents the associations of 16 universities in Belarus across the country. [5]

In the year 2021 only, the ZBS together with its partners collected evidence of 492 detained students, 246 cases of politically motivated expulsions, as well as 52 cases of criminal prosecution against students.

According to the human rights organization Lawtrend, the situation of freedom of association and civil society organizations in the Republic of Belarus is critical. As of 1 January 2022, according to the monitoring provided by Lawtrend together with the ОЕЕС, 309 non-commercial organizations in Belarus are in the process of forced liquidation, including legal proceedings, or have been forcibly removed from the Unified State Register of Legal Entities or individual entrepreneurs. [6]

But as of 24 January 2022, according to the same monitoring conducted by Lawtrend, 339 civil society organizations in Belarus are in the process of forced liquidation, including court trials, or have been forcibly removed from the Unified State Register of Legal Entities or Individual Entrepreneurs.

A number of claims, media reports on liquidation contain information that an organization carries out activities aimed at destabilizing the socio-political situation in the country, including, according to the state authorities in Belarus, increasing tension in society, contributing to an atmosphere of distrust towards the competent state authorities, inciting aggression, posting information aimed at inciting hatred on professional grounds in social networks, video of propaganda.

Following the violence of August 2020, most democratic and independent CSOs made public statements about the unacceptability of violence and a commitment to democratic solutions to political issues within the country, which provided a formal reason to accuse civil sector organizations of spreading «misinformation about what is happening».

A number of organizations have been subjected to closure due to the dissemination on their websites of inappropriate information aimed at spreading destructive attitudes in society, publishing calls for economic and political pressure on the country and other actions detrimental to national security.

Nongovernmental institutions, which have been the most popular organizational-legal form of non-commercial organizations in Belarus for the last 10 years due to mass refusals in registration of public associations, are liquidated according to the simplified system. It means that the decision on liquidation is taken by the registering body without court trial, and the founders are informed about the liquidation of the organization «after the fact». [7]

Statistics show that every fifth organization forced to decide to liquidate itself had a youth component in its activities and in the name of the organization itself.

On 4 January 2022, the Law of the Republic of Belarus No. 144-З «On Amendments to the Codes» was adopted. Under this law, the infamous Article 1931, which had previously been constantly criticised by Belarusians and international organisations as not complying with human rights standards, returns to the Criminal Code and has been repealed as of July 2019. The law came into force on 22 January 2022. The criminalisation of organising and participating in the activities of organisations without state registration took place almost overnight: it took one month from the adoption of the relevant law by the parliament to its coming into force.

Since the existence of the «famous» political criminal article 193-1 (2005-2019), there have been at least 18 cases of convictions under it in Belarus, and more than ten people have received official preventive letters from the Prosecutor’s Office. On 10 December 2007, the Committee on Legal Affairs and Human Rights of the Parliamentary Assembly of the Council of Europe had already published a report on the excessive use of criminal justice in Belarus. [9]

The report pointed to the discretionary use of legislation prohibiting lawful, peaceful activities. It called on the Belarusian parliament to repeal Article 193.1 of the Criminal Code, which criminalizes the activities of unregistered associations. The article was repealed for a short period of time, but returned after the events of 2020.

In fact, after August 2020, most youth independent civil society organizations in Belarus have been banned from legally carrying out their activities: they have been or are in the process of being liquidated, the Belarusian authorities have strengthened conditions and introduced extended changes to the reporting requirements for public associations and foundations, and have considered and approved the introduction of criminal liability for organizing and participating in the activities of an unregistered organization — which as we can see from the statistics is quite high. [10]

Another “trend” in the post-election period of 2020-2021 has been the discrediting of independent civil society organizations, including youth organizations, and their activists with the state media, as well as the propaganda Telegram channels created. The authorities also create favourable conditions for some organizations over others. A striking example of this is the Belarusian Republican Youth Union (BRSM). (BRSM). Thus, this organization is financed in accordance with presidential decree No. 559 of December 17, 2012 «On some issues of state support to the Belarusian Republican Youth Union». In 2021, the financing of the organization was once again extended — until 2024. At the same time, the decree contains information about the direction of such expenditures, which is marked «for official use».

The practice of exercising pressure on activists, including youth activists, has partially changed and intensified since the events of August 2020. Thus, representatives of youth organizations, including the member organization RADA — ZBS (Zadzinochanne belaruskih studentov), were subjected to pressure in universities: threats from the administration, expulsion, and eviction from the dormitories.

Due to the fact that there are many students among the members of youth civil society organizations in Belarus, the Belarusian authorities have chosen repressive mechanisms to influence not only the organizations themselves, as a legal institution, but also their members in particular.

According to different student initiatives and human rights organizations, since the events of August 2020, the administrations of various higher education institutions have exerted pressure on students and teachers in diverse methods.

Beginning in August 2020, university administrations began to exert pressure on the activists of the strike committees and initiative groups across the country. At different educational institutions, students could face different variants of pressure: summoning to a conversation at the dean’s office or the rector’s office, summoning to a prevention council, receiving reprimands/ warnings and reprimands, expulsion, preventive conversations with law enforcement officers at the university, summoning police officers and riot police by the university administration to disperse peaceful actions, informing law enforcement authorities about student activity, transmitting videos and data of activists to the administration, the permanent or temporary presence of an employee.

According to the data received on 12.11.2021 there were 492 cases of detention of students by the Ministry of Internal Affairs and 529 cases of pressure by the administration of higher educational establishments (296 of which resulted in expulsion). This shows an unprecedented attack not only on the social and cultural rights of young people in Belarus, but also the impossibility for all young Belarusians to have the right to education, as well as the right to freedom of association, such as to form strike groups.

In this brief review of the state and situation of youth and youth non-profit organisations in Belarus after the events of August 2020, we will look at examples of how the Belarusian authorities systematically pursue their policy of repression against youth organisations and associations, in particular against the Belarusian National Youth Council RADA and its member organisations.

The Belarusian National Youth Council «RADA» is a voluntary union of 32 youth organisations, created to consolidate youth organisations and initiatives in Belarus. «RADA works to represent, promote and protect the common interests and freedoms of youth organisations and young people in Belarus. Unfortunately, due to the political situation in the country and restrictions imposed by the state on freedom of association, RADA was liquidated in 2006 by decision of the Supreme Court of the Republic of Belarus. Since then RADA has been working without registration in Belarus, like many other youth organizations and activists repressed by the authorities.

In 2014, RADA registered an office in a European Union country to provide legal security and make its work more transparent. Despite the unfavourable conditions created for civil society organisations in the country, RADA continues its work for the benefit of Belarusian youth and Belarus.

Since August 2020, the authorities have subjected youth activists and youth organisations to an unprecedented repressive apparatus, among the main repressive actions by the Belarusian authorities throughout, including in the last almost two years, are: