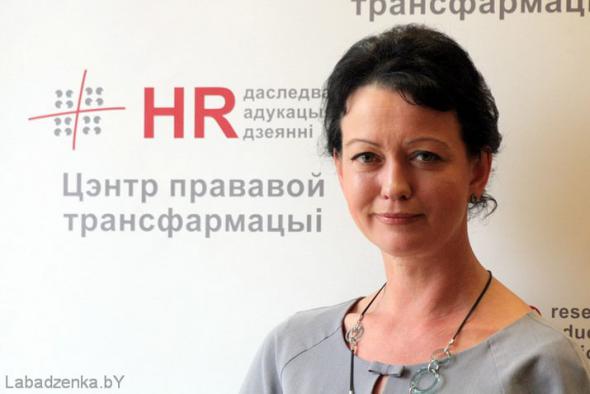 Updated information on the expulsion of Elena Tonkacheva (16.06.2017)

On June 16, 2017 the Ministry of Internal Affairs of the Republic of Belarus dismissed without consideration the appeal of Ms. Elena Tonkacheva, requesting to shorten the term of ban on entry to Belarus and to exclude her from the list of persons banned from entering Belarus.

On 21 March, 2017 Ms. Elena Tonkacheva, a Belarusian human rights defender and Chairperson of the Board of Legal Transformation Center (Lawtrend) has been denied reduction of the term of her entry ban to Belarus.

On 20 February, 2017 the well-known Belarusian human rights defender, the Chairperson of the Board of the Legal Transformation Center (Lawtrend), Elena Tonkacheva filed a petition with the Minister of Internal Affairs of Belarus I.A. Shunevich, applying for the reduction of her exile term and for the removal from the list of persons banned from entering Belarus. This is the third attempt made by the human rights defender to obtain a reduction of her exile term. She filed the similar motions on 6 January, 2016 and on 5 November, 2016, and received refusals.

In the early October, 2016 Chairperson of the board of the Legal Transformation Center (Lawtrend) appealed to the Ministry of Internal Affairs of the Republic of Belarus on the reduction of the ban on entry to Belarus and removed her from the list of persons banned to enter the country.

In January, 2016 Elena Tonkacheva had already appealed to the Ministry of Internal Affairs of the Republic of Belarus on the reduction of the ban on entry to Belarus and removed her from the list of persons banned entry to the country.

Ms. Elena Tonkacheva is a Belarusian human rights defender and chair of the board of the Legal Transformation Center (Lawtrend), a Minsk-based human rights NGO. Ms. Tonkacheva is a Russian national who has been residing in Belarus for the last 30 years. On 30 October 2014 she was notified by Belarusian authorities that her permanent residence permit would be annulled, and that she would be expelled from Belarus on the grounds of “protection of public order”. This administrative decision includes a 3-year ban on entry to Belarus. On 5 November 2014 the decision on the expulsion was confirmed by the Department of Internal Affairs of Pervomaiski District, requiring Mrs Tonkacheva to leave Belarus within 30 days. The expulsion was suspended during the appeal.

The courts of first and second instances upheld the decision on expulsion. On February 21, 2015 Mrs Elena Tonkacheva has left Belarus.

On February 19, 2015 the Minsk City Court upheld and left without changes the decision of the first instance court. Previously, on January 13, 2015 the Court of Pervomaiski district of Minsk dismissed the complaint against the expulsion of Elena Tonkacheva from Belarus. On December 15, 2014 the complaint was dismissed by the Department of Internal Affairs of the Minsk Executive Committee.

We consider this decision politically motivated, aiming to punish Elena for her activity in the field of human rights in the wake of the Presidential elections campaign. It is not the first time when Elena Tonkacheva faces the pressure. Since 1996, when she started her work on protection of human rights and advocacy of issues of public interest in Belarus, the authorities have twice shut down the organizations she founded. She experienced particular difficulties when collecting and analyzing the information on detentions and trials of political activists and participants of the mass rally on 19 December 2010, in the aftermath of the last Presidential elections. On 13.04.2011, in his televised address, the President of Belarus A.Lukashenko named Mrs Tonkacheva, along with another human rights activist Ales Bialatski, a representative of the “fifth column”, following her participation in the session of the commission of the Council of Europe PACE[1].

In the current case, the formal reason for the authorities to act was the minor speeding incident. In an official notice, Mrs Tonkacheva was told that her possessing a car might pose a threat to the safety of Belarusian citizens. Obviously, such an artificial link between the concept of “public safety” (which protection, by law, can be the ground for a foreigner’s expulsion) and a minor traffic violation is completely disproportionate and would be considered as such under any legal order existing in Europe.

More than 8000 petitions were sent to the authorities in support of Elena. Belarusian national platform “Civic Solidarity” has published an appeal to the international community. The UN special rapporteurs on Belarus and on situation with human rights defenders were notified, as well as the UN OHCHR.

Elena Tonkacheva has been permanently living in Belarus since 1985, her daughter is a Belarusian national by birth. Elena graduated from a Belarusian university, and her professional career has always been connected with fighting for the protection of fundamental rights and the rule of law in Belarus. Legal Transformation Center (Lawtrend), the NGOs she leads, is a well-known think-tank, which produced numerous reports aiming at bringing the legislation of Belarus closer to international human rights standards.

Given the speed with which all decisions regarding Elena were taken and authorized, and having in mind the absurdity of accusations, we have no doubts that the move is purely repressive and is based on political grounds.

On 29 October, 2014  Mrs Tonkacheva’s permanent residence permit was annulled with a decision by the Pervomayski district department of the Ministry of Interior of Belarus. The grounds for this decision and for the initiating the procedure of expulsion, as indicated in the explanation by police officers, were five administrative offences allegedly committed by Mrs Tonkacheva in the past year. In all cases, this was minor speeding (10-20 km/h) fixed with traffic cameras.

On 30 October, 2014 Elena received an official notice that the question of her expulsion was being considered by Pervomayski district branch of the Interior ministry with references to para 1 of Article 65 of the Law “On legal status of foreign citizens and stateless persons in Belarus”, from 04.01.2010. Following bringing Mrs Tonkacheva liable for the administrative offence under para 1 Art.18.3 of the Code of Administrative Offences, she now could be expelled from Belarus “in the interest of public order”.

The following explanation of Elena’s alleged threat to the public safety is given in the decision: “According to Article 948 of the Civil code of Belarus a vehicle is a source of an increased danger. Elena Tonkacheva, a Russian national, was conducting the source of the increased danger and exceeded the speed limit, which could have led to bodily injuries or death of the citizens [of Belarus]”.

An appeal against the decision on expulsion was filed on November 28, 2014 to the higher authority – Department of Internal Affairs of the Minsk Executive Committee. The expulsion was suspended during the appeal procedure. The appeal has to be considered in one month term.

On 29 November, 2014 the expulsion procedure was suspended until the appeal is considered by the higher authority (Department of Internal Affairs of the Minsk Executive Committee) and then by a court. Mrs Tonkacheva was given a temporary residence permit valid until December 27, 2014.

On 15 December, 2014 Mrs Elena Tonkacheva was notified that the appeal had been dismissed by the Department of Internal Affairs of the Minsk Executive Committee.

On 24 December, 2014 Elena Tonkacheva filed the complaint to the court of Pervomaiski district of Minsk against the decision on her expulsion of its country. Mrs Tonkacheva was given a temporary residence permit valid until January 23, 2015.

On 13 January, 2015 the Court of Pervomaiski district of Minsk dismissed the complaint of Elena Tonkacheva against her expulsion from Belarus. On January 22 Mrs Tonkacheva has appealed against the decision to the higher court — Minsk City Court. She was given a temporary residence permit valid until February 21, 2015.

On 19 February, 2015 the Minsk City Court upheld and left without changes the decision of the first instance court — Court of Pervomaiski district of Minsk. The decision has come into force and Elena Tonkacheva left the country on February 21.

Legal assessment of the case

The decision was not based on real facts, but on the assumption of a potential threat, because there is no information about traffic accidents involving Elena Tonkacheva. It should also be noted, that traffic camera has photographed only rear number of the car, and it is impossible to conclude that Elena Tonkacheva was driving the car.

Taking into account the minor nature of offence, the expulsion of the permanent resident of the country should be considered as an excessive interference in freedom of movement as well as in private and family life.

Background: activities of in the field of human rights

Lawtrend provides consultation aid to non-commercial organizations and initiatives; it organizes educational programs for students of law (including the annual camp on human rights); it develops its own publishing program (publications on non-for-profit law, alternative civil service, human rights advocacy).

Besides, after the violent dispersal of the mass rally on December 19, 2010 in Minsk, Lawtrend was collecting and publishing facts related to administrative and criminal prosecution of the participants of the mass event; held monitoring of the court proceedings in election-related criminal trials. Elena Tonkacheva was chief editor of the book “Afterword. Square 2010 through the eyes of human rights defenders” which, among all, describes the role of some representatives of law enforcement agencies in the mentioned events. After the book was distributed in universities and libraries, pressure was exerted on the administration of the typography that had published the book, aiming to seize the remaining books from the circulation. In 2012 Lawtrend conducted a monitoring of court proceedings related to freedom of assembly. Lawtrend cooperates with different international human rights mechanisms by providing information on human rights in Belarus, for example the alternative report to the UN UPR on Belarus (2012, 2014), CEDAW (2010) and CAT (2011). В 2011-2014 Lawtrend referred several issues to the UN Special Rapporteurs. During national consultations (2013-2014) within the UPR Mrs Tonkacheva publicly criticized the state human rights policy.

Earlier facts of pressure on Elena Tonkacheva and organizations she headed

The Legal Transformation Center was registered in 2008 with the status of Educational Agency. Earlier since 1996, this organization had operated as the Independent Society for Legal Research, a Public Association, and was forcefully closed in 2004 under the lawsuit filed by the Ministry of Justice. The reason for this first liquidation was the organization’s active work between 2003 and 2004 to defend NGOs, i.e. legal assistance and representation of interests in court for over 40 NGOs that faced forceful closure. Between 2004 and 2006, the organization worked as the Innovative Foundation for Legal Technologies. It was liquidated by court decision too.

On 29 December 2010, Elena Tonkacheva was interrogated by the State Security Committee (KGB). The KGB also searched her apartment in connection with the investigation of the case of alleged mass riots in Minsk after the presidential election on 19 December 2010. On 13.04.2011, in his televised address, the President of Belarus A.Lukashenko named Mrs Tonkacheva, along with another human rights activist Ales Bialatski, a representative of the “fifth column”, following her participation in the session of the commission of the Council of Europe PACE.